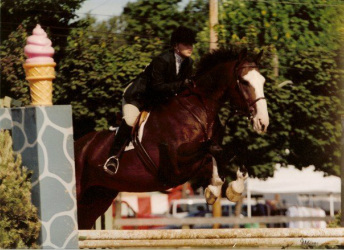 Jacki showing Just Do It
Horses have been a part of Jacki's entire life. Her mother, Linda Goad Larisch, represented the United States in numerous competitions and earned a place on the 1980 Olympic Dressage Team. Matthias, her father, also competed at the FEI level in dressage through Grand Prix in the United States and Europe. Even today, Linda still rides and competes and her brother, Ted, is a trainer with the famous Tempel Lipizzans in Old Mill Creek, IL (link below).

With both parents having a strong influence on her own riding development, Jacki brings an understanding of classical riding, dressage and German riding school influences to her own teaching and training of hunter/jumpers.

Jacki graduated in 2009 from The Ohio State University with a Bachelor of Science in Business Administration, specializing in Marketing as well as earned a minor in Equine Studies. A four year member of The Ohio State University Hunt Seat Equestrian team, she competed in all competitions both as a team and individual rider. She earned both High Point and Reserve High point rider awards.

Important influences on her riding career are Mark Tompkins and Jeannine Lamb, who Jacki spent her junior years training and showing with across the Midwest. She has also organized, participated and/or audited clinics with top professionals such as George Morris, Scott Hofstetter, Frank Madden, Dave Dorner, and Connie Stevens.

Jacki is a USHJA and USEF registered professional.